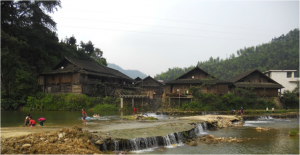 Da Yang village is located in a valley in Guanxi province. Mountains encircle the village and the sound of rushing water can be heard from each of the 52 homes. The river is the central part of the community – the people bath in it and the children play in it. The soil is lush and most of the land is blanketed with rice fields. Although the river is a benefit to the society of Da Yang, it can also become a major threat during the rainy season – when the river is prone to flooding. The average annual income for an individual in Da Yang is 1,890 RMB a year which is about $250.  All of the 226 people that live here are Miao, which is an ethnic minority in China. The Miao people have a distinct culture and language. Many of the people here are uneducated and can therefore not speak the national language of Han. This is a major economic disadvantage for the people of Da Yang because they are unable to communicate in the marketplace to sell their goods. The government officials overseeing Da Yang recognized this problem years ago and contacted China Care International for assistance in building a primary school. Han Chinese would be taught to the children which would enable them effectively communicate in the marketplace in the future. Since the school has been built a few years ago, CCI has had the privilege of seeing the living standards of the village improve dramatically. However, there are still needs that are pressing for Da Yang.

Da Yang needs a stable footbridge that is structurally sound. During the rainy season between March and August, the village is highly vulnerable to flooding. All of the water from

the surrounding hills fills the rivers and flows right through the center of Da Yang. There is currently unsuitable infrastructure to handle the force of these floods. In fact, one can see the remains of bridge on a riverbank that was helpless against the river. Currently there is a small concrete bridge that is built over the river, however, the bridge is not structurally sound and will undoubtedly be washed away during the next major flood. This specific bridge is connected to 3 main administrative villages and 6 other natural villages. When the bridge is washed over, there are 1,600 people that are unable to get their goods to the marketplace and entire villages suffer.

CCI can help through providing the materials for a more firmly established bridge that can support the influx of water during the rainy season. Widening the bridge and placing larger culvers underneath it, will allow for water to flow through freely without causing flooding or damage to the bridge. The estimated cost for this 14 meter bridge is $17,400. The people of Da Yang have raised $1,250 for the construction of this project. CCI would need to cover the remaining $16,150 to put this plan into action. This bridge will promote economic development – as the people will be able to sell their goods in the marketplace anytime of the year. This project is not a difficult one, and the simplest structure can make a lasting impact to a large number of people in Da Yang and the surrounding villages.